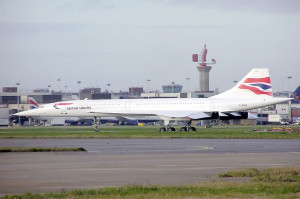 Looking at today’s news headlines I was reminded that it is exactly ten years since Concorde last graced our skies and the campaign to get her flying again is still raging. Many people were extremely angry about the way this iconic plane was retired and are still fighting for a resurrection. I would certainly love to see a triumphal return but I really don’t think it is going to happen.

I felt that I had a unique relationship with Concorde if such a thing is possible. As a small child my mother rushed me over to stand on the side of a road close to Filton Airport to see the first test flight. I can still clearly remember my feelings of wonder as that delta wing appeared over the horizon and thundered above me with an almighty roar. I had never heard anything like it and it stayed with me for several years as I dreamed of one day flying on that plane.

Concorde didn’t take to the skies commercially until 1976 and by the 1980’s I was working close to Heathrow Airport. Every day I would look forward to Concorde taking off and would often rush outside to really feel the force. My office was very close to the end of the runway and the ground literally shook as Concorde passed overhead. All of our car alarms would go off and the windows of the building rattled violently. It was impossible to talk on the phone during the take-off and we used to warn customers not to call us at 10.50am!

One day I was sitting in the office when the transport manager went deathly pale and informed me that a Concorde had crashed. I was completely mortified and felt even worse when the fleet was grounded over safety concerns. It was a wonderful day when the planes took to the skies again after modifications to the fuel tanks but my joy was short lived as it was soon announced that Concorde was to be taken out of service by both British Airways and Air France.

I was standing on the roof of my office on the emotional day when three Concordes returned home to Heathrow for the last time. There was a tear in my eye as I thought that I had seen them fly for the last time. I was wrong about that as a few days later a friend at the airport called to tell me that a Concorde had just taxied out to the end of the runway. It was the plane which was going back to Filton where it had all started. This was truly the last time that one of the planes flew and I was right underneath it when it took to the skies. I was there for the first flight and I was there for the last.

There is a concerted campaign to get Concorde flying again but I don’t think I will be getting the champagne and celebratory inflatables out any time soon. Both airlines are steadfast in their belief that Concorde should not fly again despite being offered a generous amount of cash to release one of the aircraft. I never got to fly on Concorde and that is something I will always regret. Give me hope someone!