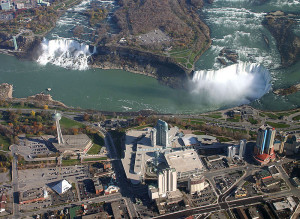 I don’t know what I was expecting when I visited Niagara Falls but whatever it was it certainly wasn’t what I found when I arrived. As a veteran of many spectacular waterfalls in the Alps and American national parks I was well used to wild water and scenic wonders but Niagara was an altogether different experience. Talk about riddles wrapped up in enigmas this was a place with a serious identity crisis.

The first thing that seems incongruous when you arrive is the built-up nature of the area. I was used to waterfalls being in regions of outstanding natural beauty with little commercial development. Niagara is more like Blackpool without the beach. The river bank is lined by high rise hotels and cluttered with tourist attractions, many of the tacky variety that you would find in a British seaside resort.

The whole vista is rather distracting. A short walk around revealed such delights as the Nightmares Fear Factory, the Criminals Hall of Fame and the House of Frankenstein. All very Blackpool but then there are theme parks and two indoor waterparks which is a bit Orlando. To confuse the area’s identity further Niagara boast two huge casinos bringing a flavour of Las Vegas to Canada. There are plenty of souvenir shops and fudge shops, personalised gifts (which remind me of a place back home!) and even two mini golf courses. Amidst all the distractions it is easy to forget that there is a waterfall somewhere! 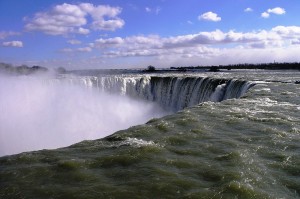 As it turned out Niagara Falls are an impressive sight. Just looking down on the torrent is pretty thrilling but you can get up close and personal by taking a trip on the Maid of The Mist. The boat ride takes you deep into the spray as you approach the foot of the falls and what seemed like a large vessel when you boarded suddenly feels rather small beneath the cascade.

Ignoring the various manmade attractions I decided to take a helicopter ride. I thought that I might as well view the falls from all available angles. This proved to be a great decision and I really enjoyed the thrill of the dramatic but brief flight.  You get a fabulous view of the scenery and also a sense of the scale of the development in the area.

It would be true to say that Niagara is now a huge commercial blot with all the features and attractions that you might find in other tourist destinations lumped side by side. It is a somewhat uncomfortable union which feels random and almost incongruous when the main event is supposed to be a natural wonder.

Now you may think that I am suggesting that I didn’t like the place. It would be more accurate to say that I didn’t approve of it, or at least where the development was. I actually had a really good time. It was indeed a bit like my experiences in Blackpool. That is a place where I always marvel at the tackiness but never fail to have a lot of fun. In Niagara’s case it just would have been nice if all the fun and games had been built away from the immediate area of what is undoubtedly one of the world’s most spectacular sights.