As you fly into Naples airport the horizon is dominated by the hulking mass of Mount Vesuvius. The volcano provides a striking, beautiful yet threatening backdrop to what is now a huge urban sprawl. I suspect that there are few visitors to the region who do not pause to contemplate the very real prospect of an eruption and if you tour Pompeii you get a terrifying look at what happens when the mountain blows its top.

I had visited the Bay of Naples twice and marvelled at the beauty of the region, the stunning coastline and the wonders of Pompeii. On the occasion of my third visit I was determined to tackle Vesuvius and to peer into the large crater at the summit. I had always wanted to get up close and personal with a volcano and as Vesuvius has walking trails to the top there was nothing that was going to stop me from taking such a golden opportunity.

On the chosen day I drove towards the mountain marvelling at the extent of the suburban area that now reached the very foot of Vesuvius. Like most large cities Naples has continued to grow leaving an inconceivably large number of people in the path of danger should an eruption occur. I took a bus part of the way up the mountain and then disembarked to complete the journey on foot. As soon as my feet touched the ground I could feel the ash on the paths and there was a faint smell of sulphur in the air. The higher I walked the stronger the smell and the mountain felt like a sleeping monster about to stir. 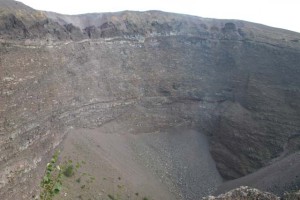 On arriving at the summit I was in awe of the size of the crater. It was a massive bowl covered in black volcanic debris and there were plumes of sulphurous gas rising up everywhere. This was a beast that was very much alive and I was just praying that it did not choose that moment to stir. I walked around the rim looking out over the Bay of Naples and from the summit you get an even greater sense of the scale of the urban development below. I could not imagine how all of those people could escape the area in time when the dreaded event strikes. 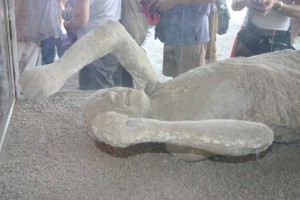 At least these days everyone knows what Vesuvius is and what it can do. When the huge eruption that buried Pompeii occurred in AD 79 the people did not know that the mountain was a volcano or even what a volcano was. An account of the episode by Pliny the Younger documents the horror of the events. Heaven knows what he must have been thinking when he sat down to write his letters.

I made it down safely from the crater and wished that I could have spent more time up there. My time at the summit and a subsequent visit to Pompeii were extremely sobering. Nature may be breathtakingly beautiful but just beneath the surface great danger lurks and nobody knows exactly when the power will be unleashed. I am glad that I have climbed Vesuvius because the next time I visit the landscape could be very different indeed.