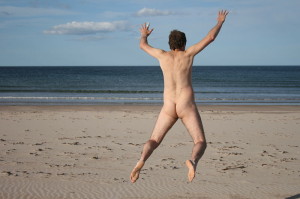 The weather at the weekend was so lovely that I thought a trip to the beach was in order! My partner and best friend were in agreement and so we set off for Dorset looking forward to a lovely day in the sun. The traffic was predictably terrible and by the time we arrived at Studland Bay the car parks were full and we were forced to park on the road half way along the beach. We had a ten minute walk to reach the sand and it wasn’t until we were almost there that I realised we were approaching the naturist section of Studland.

I have no problem with nudity but hadn’t actually contemplated trying it in pubic myself. In the event there were plenty of naturists but also several people in costumes so I figured we had a choice! My friend and I opted for modesty whilst my partner preferred his birthday suit enjoying the liberation of letting it all hang out apparently!There were certainly some interesting sights wandering past! I discovered several ways to pierce a body that I had not previously considered and after a while the whole situation did seem rather normal to the extent that I stopped noticing the naturists at all. I can imagine that some families who were not aware of the situation might have been rather shocked when they arrived though!

Giving it a Try

Once I had finished swimming for the day I took the daring step of just taking off my costume in full view of everyone on the beach and dried myself off. It did feel strangely right and, yes, quite liberating and I do believe I could be a convert to naturism after all. Actually I have started to think that our attitudes to nudity are rather ridiculous. There are really only two kinds of bodies and we all know what a man and a women look like so what is the problem? The kids on the beach didn’t seem to give the situation a second thought and I think they had the right attitude

A Change in Attitude

After our time on the beach we took a pleasant stroll around Poole Quay where I took the chance to grab some seaside gifts for my friend who has a New England themed bedroom. I felt it would benefit from the addition of a lighthouse and some small boats. I felt weirdly over-dressed walking around the town in the hot weather. Maybe I should have born been an African tribeswoman or something!

After my day on the beach I have come to realise that there is nothing shocking about nudity and that it is actually rather pleasant to cast off your clothes and go natural. It is rather a leveller on the fashion front too and it does rescue you from the dreaded tan lines that are always the result of a day on the beach. As an amusing footnote I should add that on my return I uploaded a rather nice photo of myself and my friend laughing after he had buried me in a huge hole in the sand. It was only after I posted the picture on Facebook that I noticed all the naked men walking past us in the background. What will my friends think!