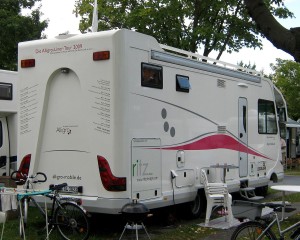 Whilst many people deem caravans to be uncool, motorhomes seem to pass muster on the street cred front. Nonetheless motorhome ownership in the UK is still relatively limited probably because few people have sufficient space at their homes to keep such a vehicle and because fuel costs have been high in recent years. They aren’t cheap either! If you can’t afford your own motorhome then you can always rent one and I would thoroughly recommend that you do because travelling with your holiday home behind you is an absolute joy!

I had never given motorhomes a great deal of thought until a tour of the Western United States made it to the top of my wish list. I was excited at the prospect of seeing the wonderful new places on my proposed itinerary but the thought of having to drag my luggage in and out of a succession of hotels did not appeal. I was also anxious to spend as much time as humanly possible enjoying the great outdoors and so any way of lodging closer to nature looked like a good idea.

I booked my first motorhome or RV as they are called in America, with some trepidation. I was unsure as to how easy the thing would be to drive as my chosen vehicle was 28 feet long and I knew nothing about the ins and outs of hooking them up to power and water supplies at the camp sites. As it turned out even a large RV was pretty easy to drive and there were few other issues that proved to be problematic. That is not to say that this trip or indeed subsequent ones have been without incident. Motorhomes are things which present unexpected challenges. You know the sort of things – the incidents that you don’t worry about in advance because you never imagined that they could happen! 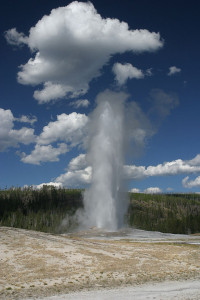 Take my second RV trip. I was enjoying a great stay at Yellowstone National Park when it became obvious that the vehicle’s waste water and sewage system was blocked. My cousin decided that the way to sort the problem out was to insert the water hose into the waste tank from the outside and squirt water up into the tank. This might well have been a great idea anywhere else but the water pressure at Yellowstone is ridiculously high, so high that the taps require the addition of a pressure regulator. Naturally we removed this device as we wanted some oomph but what we got was an explosion of sewage all over us and our plot when we turned the tap on! We certainly cleared the blockage right there!

We ran into trouble on the same trip when we attempted to park the RV on a verge at the side of the road in order to do some bear viewing. Having come to a stop we all jumped out of the vehicle and ran to a good viewing point. After a few minutes we looked back at the RV to discover that it had started to tilt dramatically and was in danger of falling on its side. I have never run so quickly in my life! Disaster was averted just in time. Mental note to oneself duly made – RV’s are a little top- heavy.

On that very first trip that I mentioned there was much hilarity at the camp site in Yosemite one evening after a visit to the toilet block. There is a toilet in RV’s but with four people in the vehicle you sometimes have to go elsewhere! It was pitch black as I walked back and as I approached the van I was extremely alarmed by a growling noise which appeared to be coming from the vehicle. We were in the heart of bear country and I feared that a bear had either infiltrated the RV, in which case my family were probably dead, or that the bear was hiding underneath waiting to pounce. It was only as I got right up close that it dawned on me that what I was hearing was the vehicle vibrating as my cousin used his electric toothbrush!

Motorhome holidays are fabulous adventures. Once you are in your vehicle there is no packing and unpacking or lugging luggage. You can spend all of your time travelling and enjoying the great outdoors and there are always surprises along the way. One day I hope to own my own motorhome and a house with a plot large enough to accommodate it. Maybe I should just buy a large model and live in it. Problem solved! All they require is regular servicing like a car and a habitation check every year to ensure that the living accommodation is safe and in working order. A great investment methinks.